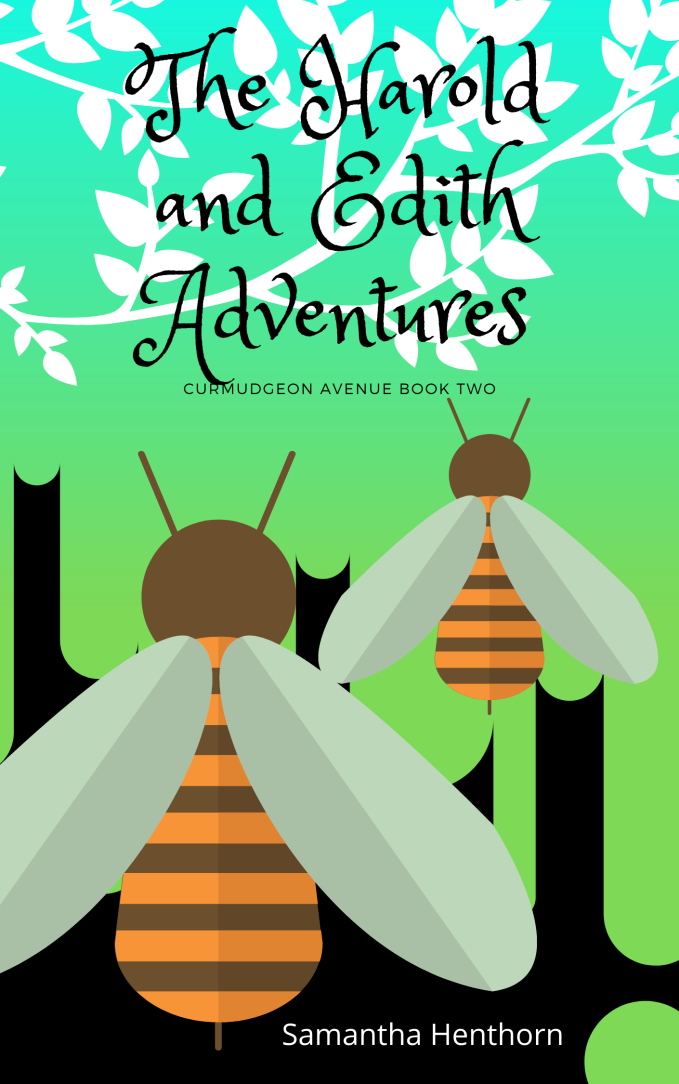 Say what you like about Harold Goatshed. Actually, allow me to say a few things right now – The man’s a nincompoop! His commitment phobia, his malodourous existence and his personality, which can only be described as a failure. However, Harold Goatshed is quite an intelligent man. Skilled in the art of convenience, not necessarily, but usually at the misfortune of others. At the moment the ‘other’ person is Edith. But this is where Harold is about to use his talents, especially with all this talk of elephants in the ether Harold worried that the case of Deirdre had been re-opened. And this would leave him in a pickle – one of those giant sized jars of pickle you sometimes see for sale at Christmas time. Enter Harold’s insurance courtship of Edith. (Eww) I hope you are not a too squeamish reader – stuff’s about to get amorous.

‘But where are we going Harold? I don’t know what to wear!’ Edith clutched the top of her floral dress. Whitefield’s November had made today’s outfit look like a nightdress underneath her coat. Harold did not see the point in getting into a conflab with Edith before they reached their destination, however, over the years, his people skills had developed. He put his arm around Edith, she looked up into his face where she saw his lip-lickers lips slightly part, then form a kissing shape in her direction, he then planted that pout on the top of Edith’s head. The tram arrived at Whitfield’s Metrolink tram station, and Edith realised they were on the way to Bury – via Radcliffe (but only because that is the tram station in between).

‘Edith, I know you’ Said Harold, sitting side by side, taking her hands in his again ‘Now I’ve noticed that since we have discovered, we’re being investigated for benefit fraud…’

‘Shhhh! Harold! Trams have ears!’ Said Edith desperately looking around at the empty carriage (No Edith, trams do not have ears). Harold gently, yet condescendingly placed his forefinger on Edith’s lips.

‘I’ve noticed Edith, that you’ve been hiding in your under-the-stairs cupboard again, and you only do that when you are stressed about something’ Harold’s head wobbled, Edith’s eyes were magnified in devotion. ‘And I think I know what it is’ Harold purred.

‘What is it?’ Edith spoke softly, Harold’s talents were already working, and we haven’t even passed Radcliffe yet!

‘You’re worried that because we have to pretend we are not carrying on with each other, that I’m not serious about you. But I am Edith, and that’s why I wanted to take you out tonight. Somewhere special… to show you what you mean to me’ Harold was proper pleased with himself, as Edith nestled into his armpit, with all kinds of dreams of romance and secret love popped into Edith’s head. A bit of sick came up into my mouth (yes, houses have mouths) when I realised what had been going on, on the tram.

They arrived in Bury, and swiftly made their way to yet another train station, this time for the East Lancashire Railway and its locomotion of steam trains. Harold spun Edith around. ‘What do you think, Edith?’

‘Now,’ Harold handed Edith one of the two plastic bags-for-life he was carrying. ‘Go and… slip into something more comfortable, and I’ll meet you back at the bar, then, I’ll reveal your surprise to you’ Harold meant that Edith should get changed in the disabled toilets, there at the Trackside pub on the platform. And they say romance isn’t dead. It isn’t – although Harold appears to be doing his best at a slow assassination. Edith made her nonplussed way to the disabled facilities. The door would not lock properly; nevertheless, Edith started to take her clothes off. Just as she was wondering if it was necessary to remove her floral knickers, the door swung open blowing November right into Edith’s Wonderbra.

‘Oh! Sorry love, you should lock the door if you’re in the loo!’ The able-bodied woman said, as she barged in, pulled her own knickers down and proceeded to tinkle a tune into the Victorian toilet.

‘Don’t mind me, I’m bursting, there was a queue at the normal ladies’ She did not wash her hands before leaving, but gave Edith a piece of advice ‘Don’t forget! Lock the door!’ Poor Edith looked into the bag and found what she was supposed to change into. Edna would not have put up with any of this nonsense, but with the promise of a romantic surprise from Harold, Edith obediently changed into the non-romantic looking outfit that Harold had provided.

Meanwhile, Harold was propping up the Trackside’s bar inside. He had just overheard an ingenious idea from a friendless drinker, who had managed to get free samples of all the ales on tap. Harold was now standing, with two free half pints for Edith and himself decked out in a fancy dress costume as Mark Antony full Roman General regalia, including a moulded breastplate. It was November after all, and no one wants to see Harold’s chest hair that is merely a collection of pubes surrounding each nipple. Even the friendless drinker did not want to associate with Harold after what happened next, however.

From the safety of the disabled toilet on the platform, Edith entered the scene wearing her own costume, provided by Harold. He had made use of the previous party’s ghost outfit, the sheet was now wrapped around Edith, sari style. She had a jet black wig atop her little head, pointy nose poking out from behind the curtains it had formed around her face. Black eyeliner smudged around her wee eyes as instructed, and floral underwear visible due to the holes in the sheet that had previously been eyeholes.

‘Oh, is that who I’m supposed to be! Oh, that explains the snakes!’ Said Edith. Harold had spray painted some of the leftover jelly worms that Toonan had brought to the Halloween party. How resourceful. She had not batted an eyelid at Harold’s outfit, well, that’s Edith for you.

‘Yes, Edith and that’s not all. Here, have a sip of this ale before it goes flat.’ Harold said ‘Tonight, we are going on the murder mystery tour on the steam train! It’s a slap updo!’ Ahh, he was so pleased with himself. Edith’s fake hair got caught in the free ale she was supping.

‘Why are we dressed as Antony and Cleopatra then?’ She said while glancing at her own naked wedding finger.

‘Well, that’s the theme, Edith, Murder Mystery night. Shakespeare’s Antony and Cleopatra! I thought it would be romantic, although it’s a bit of a stretch, their tragedy did not arrive via murder, Julius Ceasar was murdered. Oh, but hang on, is that a different play?’ But then Harold quickly came to realise that he had misread the tickets because a sleuth of Agatha Christie fans had just entered the bar.

‘Ohh, I wish I was dressed as Miss Marple! I’m freezing Harold’

Well, not to worry, after the wine had become flat and the food had gone cold, the introductory speech from the murder mystery organiser had finished, and Harold and Edith were seated at the far end of the train. The Agatha Christie sleuths were situated nearer the driver, while a team of amateur dramatic performers made their way up and down the train speaking in clues as to ‘whodunnit’. The train set off, and Harold and Edith were on their own in that part of the train, alone, surrounded by glasses of sparkling wine, food and the subconscious romance of renovated steam trains. When Edith realised this, although Harold may have messed up the outfits and his promises of showing Edith what she meant to him had not resulted in an engagement ring, Edith was smitten.

‘Haven’t you done well, Harold, booking a private carriage at the end of the train? How romantic!’ Edith said,  maybe he’s trying to get me in the mood? That was until the waiter arrived and spoiled the smoke screen by letting Harold and Edith know why they were alone.

‘Don’t worry! You don’t smell!’ He said (well Harold does, he has a really funny smell about him actually…)

‘Apparently, the party that booked these tables were out at a bonfire last night and unfortunately one of them got into a bit of trouble with a sparkler down her wellington boot, so they’ve all gone to the hospital to visit her instead of coming to the Murder Mystery night’ The waiter tootled off with his service trolley.

‘Are you thinking what I’m thinking, Edith?’ Whispered Harold.

‘What? That our Ricky was right about Bonfire night and wellington boots?’

‘No Edith’ Harold purred… Oh goodness! He’s going to snog her, isn’t he! But Harold did no such thing. He pushed past Edith and leapt to the other tables ‘Free food!’ He whispered. Harold filled his plastic centurion hat up to the brim with posh train buffet bits and pieces.

Harold and Edith never did get to solve the murder mystery, they had to leg it to the tram, being Sunday, the last one is earlier. From this point on, however, Harold banned any parties or nights out that involved fancy dress.

‘Good’ Said Edith, ‘Because I have accidentally left my fancy dress in the disabled toilets at the Trackside!’

Join me at the same time next week when we find out who Babycham Barbara is.